This Sunday gone was the family-friendly midafternoon Castlemaine launch for The Third Fruit is A Bird. Midafternoon so that it would a) dovetail nicely with the monthly Farmers and Artists’ markets in town and b) not be too incompatible with afternoon naptime.

There was a good turnout of all ages, from 18 months to ages that it’s probably not polite to ennumerate, and I did my very best all-ages reading accordingly. No f-bombs were dropped, if you get me. Not that my readings are ever very f-bombtastic, although in my previous life as a poet touring high schools, I would bring out poems like “Kevin the F—ed Up Goldfish” to capture the more reticent students’ attentions. Sunday’s crowd, happily, did not require such rude awakenings to command their attention.

The Melbourne launch had been under the ground, in a space only accessible by descending a set of stairs, and in an accidental bid for  symmetry, the launch at the CASPA contemporary art space was an upstairs affair, located neatly above Stoneman’s Bookroom.


The afternoon began with a reminder to those in attendance that the lovely Kynan Sutherland is more than just an accomplished visual artist, as he welcomed the arriving audience with his generous response to my request for “some classical guitar-y noodling”. 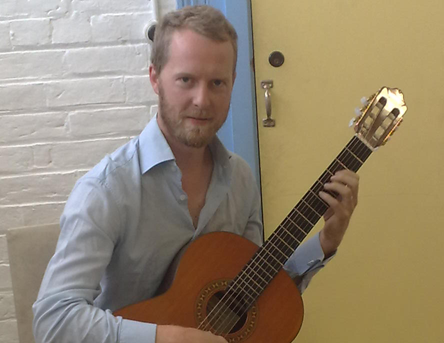 After a sufficient degree of noodling had gone on, Kynan set aside his guitar and said some nice things about me before allowing me to take what served as the stage, in this case the far corner of the room.

I was pretty happy with how my reading went. Some people had already bought a copy of the book and were studiously reading along with me, though not aloud, which was kind of them. At one point Oonagh ran up to me and gave me a mid-poem hug around the knees, which was heartbreakingly life-affirming, and I’m proud to say I didn’t miss too much of a beat as I dad-patted her on the head and kept on reading. 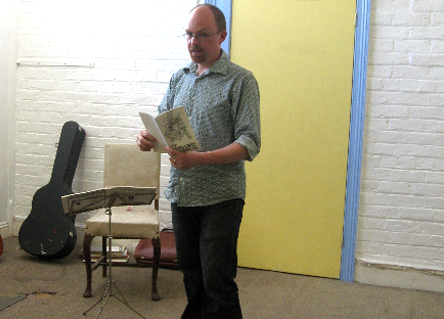 I wound things up a little sooner than I did for the Melbourne launch, mainly because the attention span of an audience that includes so many toddlers is not as robust as the kind of audience you find in underground zine bookshops after work on a Thursday.

The thing is, you don’t just have to contend with the kids’ short attention spans – you have to accept that when you lose the kids, you lose their parents too as they take them away in search of other entertainment and also in order to generously keep the crowd noise to a dull rumble.

They needn’t have worried – I was once ignored for an entire set by a drunken O-Week crowd of first-year engineer students at Charles Sturt University in Bathurst. No crowd of bored toddlers could hold a candle to that mob.

As people were starting to leave, Mum and I realised that we hadn’t actually taken any photos, so I quickly grabbed Kynan and got him to strike a few poses. Mum took a shot of me in the corner with my book, and then snapped a few of the remaining crowd for good measure. 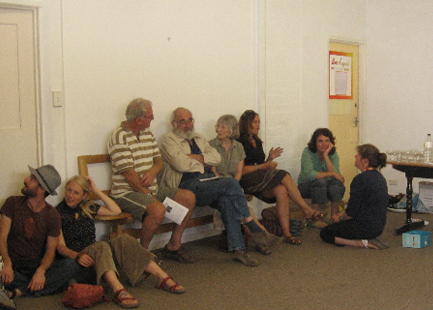 There was some nice mingling and thankyou-ing and autographing afterwards, which is always gratifying. My friend Stephanie, who had multitasked picking up her teenage daughter after work with coming along to the launch, told me that she had been embarrassed that Lydia had spent the entire reading texting her mates, which didn’t bother me at all.

Stephanie went on to say that she was pleased when Lydia pricked up her ears when I started reading of “Infinity Plus One”, a poem that tries to wrap every primary school cliche about boys kissing girls into the one conceptual space, and decided to buy a copy to give to her boyfriend for their four-month anniversary.

If I achieve nothing else at all ever with my writing, that anecdote is going to keep me warm at night for a long, long time.