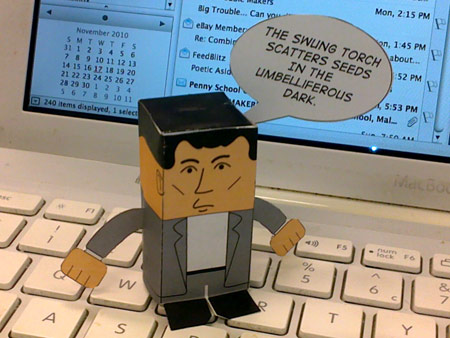 The theme of both issues was the work of fabled nonexistent 1940s Australian modernist poet Ern Malley – poets were invited to send in their own as-yet-undiscovered works of genius as penned by Mr. Malley and his kin (both blood and artistic varieties).

And the reason cordite is one of my favouritest-ever Australian litjournals is that they’re the kind of journal that will happily publish a silly little cut-out-and-stick-together paper doll alongside poetry, book reviews and essays. You gotta love that, and not just because you’re the guy who made the doll.

Anyway, if you want to approximately recreate the above scene, you can download the doll/puppet, including assembly instructions and a potted history of Ern Malley. Just head over to cordite to do so.