This Week I Are Mostly Been Listening To… 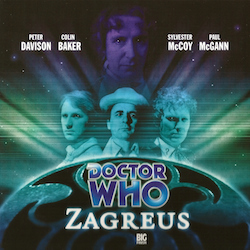 In the wake of the 50th anniversary of Doctor Who and the 15th anniversary of Big Finish beginning to release audioplays featuring original cast members from Doctor Who reprising their roles as the Doctor and his friends and enemies, veritable swathes of the Big Finish back catalogue have been made available for very cheap indeed. I’ve picked up a few bits and pieces for a dollar or two, and recently gave Zagreus a spin on the ipod.

Zagreus was released in 2003 (two years before the TV show was relaunched) to celebrate the 40th anniversary of Doctor Who. It stars the dulcet-voiced Paul McGann, who played the Doctor in the infamous television movie from 1996, and co-stars former 1980s Doctors Colin Baker, Sylvester McCoy and Peter Davidson along with other voices from the history of the show: Lalla Ward as Time-Lady Romana, Louise Jamieson as former companion Leela, and John Leeson as everyone’s favourite Robot Dog, K-9. There’s also a posthumous cameo from Third Doctor Jon Pertwee as a disembodied voice, thanks to some sweet post-production tricks.

Most Doctor Who plots sound ridiculous when you write them down, but for what it’s worth: The Doctor and the TARDIS have been possessed by “anti-time”, which splits the Doctor into two personalities: his own and the evil nursery-rhyme protagonist Zagreus. Meanwhile the TARDIS turns itself into a hologram of Brigadier Lethbridge-Stewart and travels with the Doctor’s current companion, Charlie, to investigate historical events that will reveal the secrets behind the Time Lords’ power to travel through time and also answer the question “what was here before the universe began?” (Answer: something very powerful and not very nice that sounds like a mashup of a horserace and a primary school playground at lunchtime and that would very much like to destroy us all). Along the way many Alice Through the Looking Glass references are made (including a chase scene where the Doctors are pursued by a Jabberwocky, which gets two thumbs up from this unrepentent Doctor Who and Lewis Carroll fanboy).

Unlike most stories featuring multiple versions of the Doctor, this one has the various Doctors meet and interact as holograms and inside the current Doctor’s mind instead of travelling in time to literally meet each other, which nicely sidesteps the annoying “we’ll never remember this adventure” bizzo that can make some otherwise lovely team ups feel like they never “really” happened. The requisite references to Doctor Who canon are made, but they tend to land on the side of pleasant recollection rather than OCD recitation. The plot refers heavily to Doctor Who minutiae, but never relies on it, and trundles along merrily with both humour and gravitas that should appeal to fans and non-fans alike. Zagreus seems to be regarded by whovians as something best forgotten, but I thought it was fun, clever and well executed, and that it demonstrated a real (and contagious) love of the show. Which is exactly what you want from an anniversary story, really.

Tagged with: big finish, Colin Baker, Doctor Who, Dr Who, india fischer, paul mcgann, Peter Davison, Sylvester McCoy, zagreus
Posted in i would like to recommend these people's writing, Me and my opinions

Sign up for my regularly irregular newsletter to stay up to date on where you might perforce encounter my wordinage.

All new subscribers will be sent an exclusive “thank you” ebook and a positive affirmation button badge.