Anna scored a $1 DVD copy of LadyHawke at the op shop the other day.

What’s that? You don’t know of LadyHawke?

To be honest, the trailer doesn’t really sell it, but trust me this is an excellent film about a cursed werewolf and a cursed hawklady in love who team up with Ferris Bueller and Rumpole of the Bailey to break their curse and win each other’s love again. It’s awesome. I watched this movie a bajillionzillion times as a kid on a crappy TV-dubbed VHS tape. It’s pretty shlocky, but it’s also pretty wonderful too.

Anyway, I did the only thing a sensible person could do in response to such a great op shop find: I livetweeted the sucker. 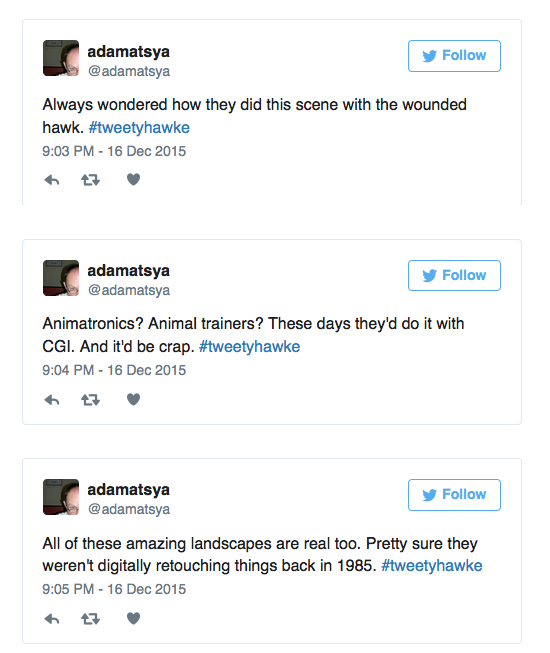 It’s a blow-by-blow retelling of one man’s evening spent rewatching a movie he’s watched over and over since his teenage years. There are laughs and there are tears and there is also what may well be the beginnings of what I like to call “The Ladyhawke Cinematic Universe”.

It’s all over on storify. Join me, won’t you?

A while ago I went away by myself for a weekend to work up a couple of poetry manuscripts for some prizes, one of which was the Whitmore Press Manuscript Prize.

I was pretty happy with what I walked away with after that weekend, and also pretty stoked to find out a couple weeks back that I’d been chosen as one of the 12 shortlisted poets for the prize. It was a nice affirmation and an indication that I might not be the only person who’s interested in poems featuring Robocop and Richard Nixon.

Sadly I didn’t make it as the final choice of the Whitmorians – that honour went to Carmen Leigh Keats. Congratulations to Carmen and best of luck with the making of her new book. Congrats also to my fellow shortlistees – it was nice to note that there were no massive heavy-hitting names on the list this year (at least none I recognised) after last year’s co-awarding of the prize to Jill Jones and Tracey Ryan.

Anyway, nice to be shortlisted. Now I just need to try to convince someone to actually publish these poems.

And, is it just me and have I just noticed, or is the Whitmore Press logo meant to look like the colon-P emoticon guy? :P 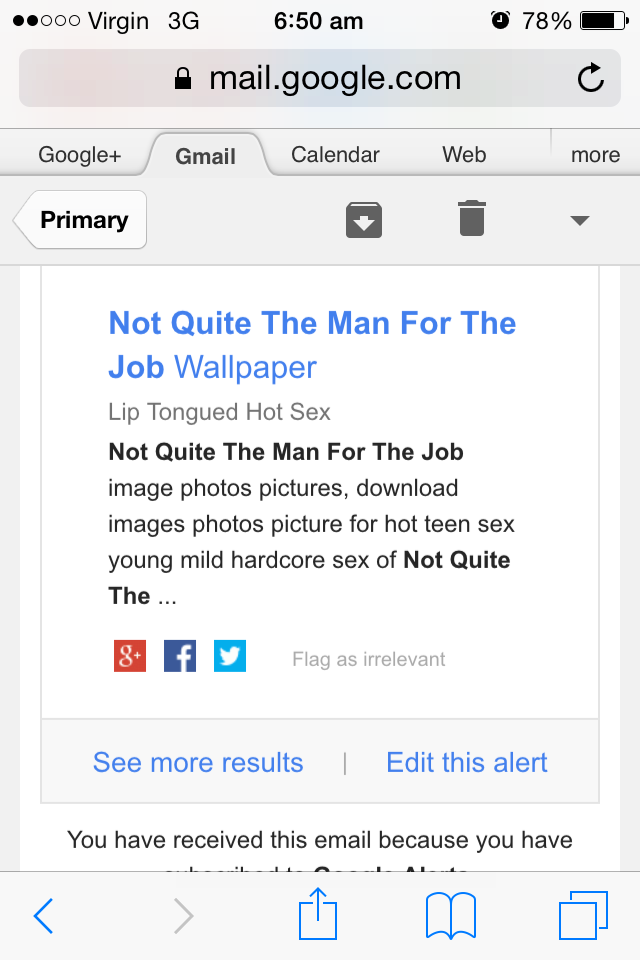 I’ll admit that self-googling is a bit indulgent, but this is not what I had in mind when I set up alerts for my books.

The one I rambled about here? I got an email over the weekend from Australian Poetry Journal asking for a bio to go with the poem because they want to publish it in (I think) the July issue of APJ. Which is really unexpected, given my track record in recent years for successful poetry submissions, but hey four days is definitely less than ninety, so that’s pretty nice.

Of course the irrational lizard part of my brain is now determined to test the association between that blog post and this quick turnaround, and it’ll be hard hard hard not to post another snarky blog about how long it takes to hear back about submissions the next time I send anything out into the scary big world of journals.

Friends of mine on Facebook were talking about a Doctor Who rewatch night they had to celebrate 10 years since the first episode of the new series was screened back in 2005. They voted among themselves to decide which episode featuring each of the four actors to play the Doctor they would watch, and came up with this list:

All fine episodes, eminently watchable. Which I plan to do myself very soon. But it got me thinking about what my own 10-years-of-Having-Doctor-Who-on-Telly-Again one-ep-per-Doctor watchback list would be, and I came up with this (spoilers obv):

END_OF_DOCUMENT_TOKEN_TO_BE_REPLACED

and I really think it’s a good one so I sent it off to a few magazines and lets see what they all say right?

And all of the automatic responses from submittable came back bam bam bam bam which is great that’s using automated systems in a smart way all of the autoreplies very kind and polite and based on all of those kind autoreplies it looks like I’m not going to know whether any of them want this poem UNTIL JUNE AT THE VERY EARLIEST.

Oh and PS in the meantime please don’t publish it on your blog or we don’t want it any more.

Like I said I’m pretty proud of this wee poem and I’m jonesing to get some kind of reader response about it and it’d be great to have it published in print somewhere or even dare I say it get paid for it too but hot damn that’s a long time to have to wait for anyone to see the freakin’ thing.

Muhammad Ali Reads his Poem about the Attica Riots live on Irish TV
What it said up there.

Pitt Street Poetry – Melinda Smith
Remember that whole Prime Minister’s Litareary Awards muckamuck a while back? With the dual winners and the hoohah about the PM telling the judges who shoulda won? Hands up if you can tell me who won the poetry award? Anyway I’ll just tell you. It was Canberra poet Melinda Smith. Here’s a sample from her book, Drag Down to Unlock or Place an Emergency Call. And here’s her blog.

On the Phenomenon of Bullshit Jobs
This is one possible answer to the intriguing question “why do people who have tangible jobs get paid so much less than people who have jobs where it’s impossible to explain what they actually do?”

Chainsawsuit – Tire King is your BAE
Speaking of bullshit jobs, this is kind of what my job is like, sometimes.

Twine – The Video Game Technology for All
Twine is this free software that lets you make text-based games, kind of choose-your-own-adventure-y, zorky kind of things. Here’s an interview with Porpentine, creator of the hit Twine game Howling Dogs (which you really must play), which has lots of links to other games too (which you really also must also play).

So a while back those crazy kids at if:book Australia were running this remix project called Lost in Track Changes where five writers were asked to write something and then also remix or respond to the things the other five writers wrote.

Anyway, long story short: I wrote a thing for Open Changes in the last week of the project, and it got picked. Given that there was no week nine, it didn’t get posted and remixed, but it did get included in the final iteration of Open Changes, which was a big-arse poster that featured the things that all the successful writers wrote, all designed to look like a tree and shit. 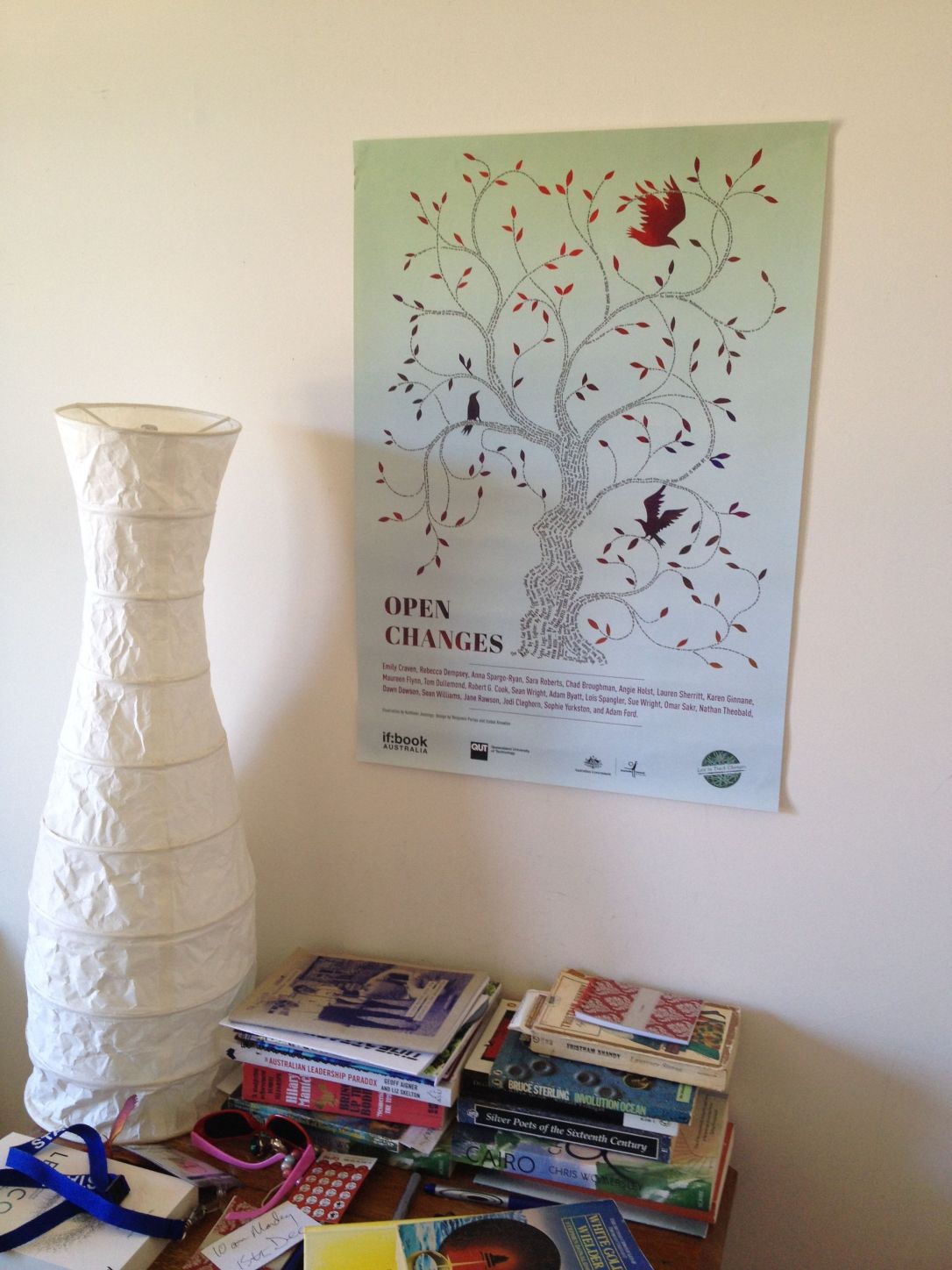 END_OF_DOCUMENT_TOKEN_TO_BE_REPLACED

I’ll let Mr Morrison be after this, I promise, but I just wanted to get a few things off my chest. This comic is so heavy with  references to 1986’s seminal game-changing Watchmen that it’s hard to see anything else in it, including plot or character. Basically you’ve got the superhero characters that DC Comics wouldn’t let Alan Moore use in Watchmen mimicking the plot of Watchmen by effectively taking the place of the characters Alan Moore ended up using instead, as though Moore had actually been allowed to use those proscribed characters in the first place. Which is neat in an easter-eggy kind of way except that 1) the comic they’re referencing is 28 years old and 2) Watchmen has loomed so large in contemporary superhero comics for so long that pretty much anything interesting that could have been said about it has already been said.

Outside the Watchmen references there’s not much else going on of interest: a lot of heavy-handed symbolism (a bazillion references to infinity and the number eight that include the layout of the comic itself), characters who know they’re in a comic (something  Morrison drops into almost everything he writes, but which he doesn’t actually ever do anything with), a staccato arrangement of scenes that resemble a narrative, and parallel monologues that vaguely resemble dialogue, overlaid with a brusque cynicism and casual approach to violence that comes across as just plain mean or cruel, especially for a writer who has in the past made arguments for superheroes as moral compasses and comics as living worlds.

Quitely’s art is lovely, as always, straddling the line between realism and cartoonishness in an eye-catching manner. The opening scene’s depiction of gobbets of blood and teeth pouring out of a man’s face after being shot in the head seemed a disappointing waste of his talents, though, and the intensely large number of panels per page (often choked with speech bubbles) used throughout the comic left me squinting more than gazing in delight at his work.